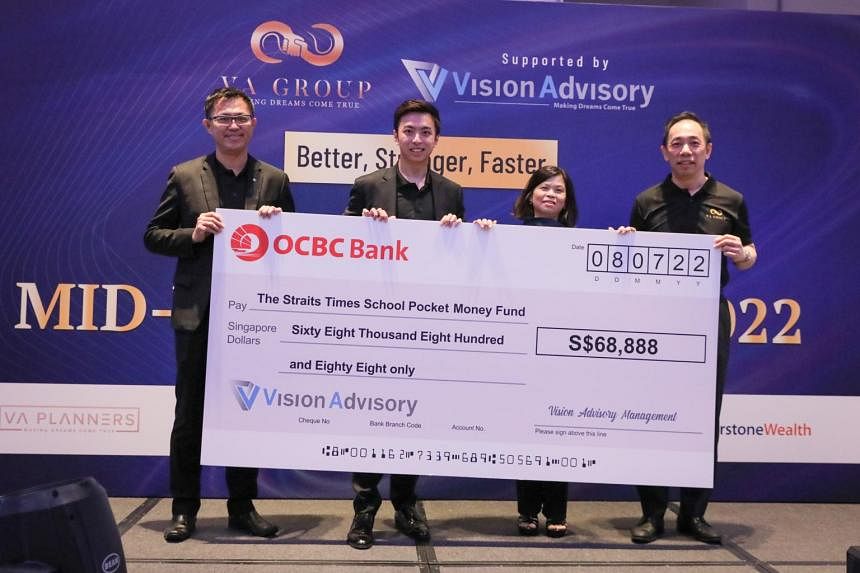 SINGAPORE – Mr Bentley Cheng was six years old when his father, who worked in an insurance company and ran a car importing business, was financially hit by the Severe Acute Respiratory Syndrome (SARS) outbreak.

His family had to sell his house and his car, and although they overcame these difficulties, the memory stayed with him.

Now 25, Mr. Cheng is executive director of Vision Advisory Management, a service platform provider that works with partners and merchants to deliver lifestyle financial solutions to its clients.

And he led a campaign within the company to raise $68,888 for the Straits Times School Pocket Money Fund.

On Friday, July 8, he presented a check to the fund’s managing director, Tan Bee Heong, at the Singapore Marriott Tang Plaza Hotel. A total of 30 employees, including Mr. Cheng, have contributed to the fund that helps children from low-income families pay their school fees.

“This year is my ‘quarter life’ birthday and I wanted to do something special… I was not born into a wealthy family (and) when the Sars crisis hit, my business father were affected,” he said. The time of the straits.

“Furthermore, just two years ago during the Covid-19 pandemic, when I was studying part-time at university, I noticed that many of my classmates could not afford their tuition fees. schooling.

“I have also noticed that the cost of education has increased over the years. So I wanted to share the love by giving back to society, and I also hope to share the idea of ​​helping each other with more Singaporeans, especially future generations.”

After talking to his father Tony Cheng, managing director of Vision Advisory Management, he decided to get the company involved.

Between April and June of this year, young Mr. Cheng solicited donations from staff, donating $10,000 to the fund himself.

His efforts won praise from Ms Tan who said: “It is encouraging to see a young entrepreneur like Bentley volunteering to help our students from low-income families. We hope this will inspire more young Singaporeans to play a role in making a difference to the lives of those less fortunate.”

Since its inception in 2000, the Straits Times School Pocket Money Fund has distributed nearly $90 million to date and has helped over 200,000 beneficiaries.

Light Up The Skies In July In Animal Crossing: Pocket Camp – News

Sydney Airport flight delays: How to avoid a pocket slam amid flight cancellations and airport chaos