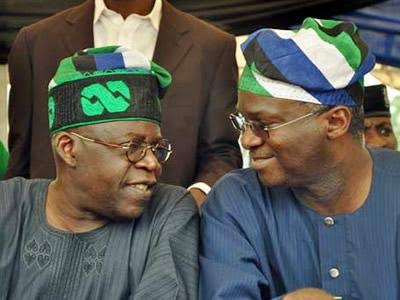 Former Lagos Governor and Minister of Works and Housing, Babatunde Fashola, has revealed that the All Progressives Congress presidential candidate, Bola Tinubu, was very generous with him when he was a young lawyer.

Fashola explained how he met the APC leader and the genesis of their relationship.

He explained that before meeting him in person, he had seen Tinubu in various events.

However, they were introduced when a nephew of Tinubu joined his company.

The minister, in an interview with The News published in 2021, recalled how generous Tinubu was with him and often gave him pocket money.

He said: “It is an invitation to travel down memory lane. I think it must have been in 1990 or 1991. He was then treasurer of Mobil. His office was at the Bookshop House at CMS on Odunlami Street. I did not meet him directly. I had seen him at parties, but we had never met. At that time, I was a senior partner in the law firm of Sofunde, Osakwe, Ogundipe and Belgore, where I practiced.

“Wale Tinubu, his nephew, therefore came to join the law firm. He was always talking about “Uncle Bola”, and one day he said: let’s go see my uncle. We arrived and went to lunch with him. That’s when I could say we officially met.

“From then on, he would consult us on legal matters and we would help him and give him advice. Sometimes he just said. “If we have this problem, what do you think, lawyers?” We were running around and he always gave us pocket money. I think one thing that left some impressions on me was his commitment to his staff and that was symbolized by what I witnessed on a particular day after the celebration of Sallah.

“He brought meat from Sallah to the office and supervised its sharing from floor to floor. As elated as his position was, he was keen to make sure those who couldn’t come to his house, even the smallest driver, had a slice of Sallah’s meat. I remembered that after the meat was shared, he sent someone to calculate how much it would cost to buy a soft drink for everyone and also distributed some money to them.

“The incident left an impression on me and what became a practice when I started observing the killing of rams for Sallah. To me it speaks to his concern for those who work for him.

On why he thinks Tinubu described it as one of his greatest accomplishments, Fashola replied, “Well, there are several ways to look at it. For me, that kind of statement coming from him puts more pressure on me. I thought I saw all the pressure that could come from this experience to be Governor of Lagos State. It adds pressure on me to a great extent.

“I think how I became governor is common knowledge. Nothing could pressure me more than the commitment to pursuing his decision in 2006 that I was his approved candidate for governor and the cost in terms of stress, disagreement, fighting and long-term emotional arguments. Of course, immediately after winning the election, the biggest pressure was to make sure I didn’t regret my decision.

“First, the people of Lagos State could have said, ‘We didn’t know the man you brought in and he upset the state.’ There are other aspects that I would like to keep to myself. As I have said many times, he should sit down and write his memoirs so that people can know the history of this election and this is what he should use to explain to the people of Lagos the offers, the counter-offers and the choices he made and why he, so to speak, went bankrupt.

“The question to ask is, what was his ongoing commitment after eight years, as well as questions about who became governor and who didn’t? But, in terms of the next step from there is to say that it is an enriching experience for our democracy, and not only for me. It is also a question of strengthening the institutions in the sense that I have continued to compare our 13-year journey despite its developments with those to which we seek to compare ourselves.