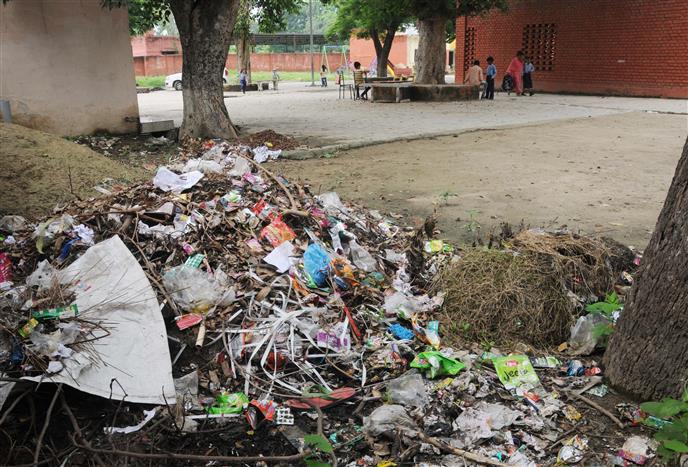 With no recruitment of cleaning staff in recent years, the majority of public schools in the district are struggling with the shortage of sweepers. Teachers have no choice but to hire sweepers and pay out of pocket.

A data from the Department of Education shows that about 48% of sweeper positions are vacant in different schools. Against the sanctioned positions of 668 middle, high and high school sweepers and the District Education Office (DEO), 349 seats have been filled, while the remaining 319 are vacant. Schools have piles of rubbish on or near the premises.

Officials said no sweeper recruitment was done after 1998 in the department, which led to a gradual increase in the shortage of sweepers.

When the TNS reporter investigated, it was found that the majority of schools had provided sweepers and were paying out of pocket. Only in primary schools, a budget of Rs 8,000 per worker/per month was made and that too started from this month. While in other schools including high school, high school and middle school, there is no budget provided for sweepers.

“Our sweeper retired almost six months ago, and no sweeper has been given to us by the department despite several requests, so we have arranged one from the village. That we pay the sweeper out of our own pocket,” said a teacher from the Nilokheri block.

A teacher from Indri block said that no recruitment had been done in the past few years due to which the schools had faced many problems. The Prime Minister asks people to maintain cleanliness, but schools are neglected in this mission because no one is busy recruiting new sanitation workers.

Deepak Goswami, former secretary general of Rajkiya Prathmik Shikshak Sangh, Haryana, demanded that the government appoint sweepers in schools. In some schools, part-time sweepers have been arranged by staff members, but this is not a solution.

Raj Pal, DEO, said he sent the request to higher authorities to fill all vacancies for sweepers. They hope that all vacancies will soon be filled.

District Elementary Education Officer (DEEO) Rohtash Verma said earlier that there was no budget for sweepers in elementary schools, but starting this month a Provision of Rs 8,000 has been included in the budget. “We received the budget and sent it to the BEOs for disbursement,” the DEEO said.