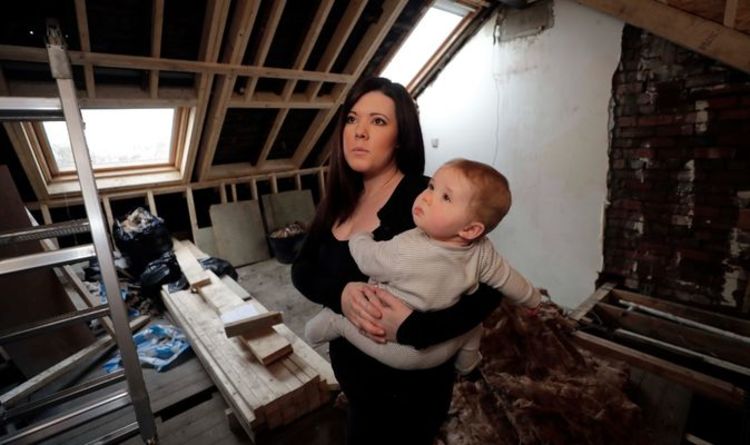 Residents who refuse to leave the forgotten housing estate

A couple in Leeds claim their loft was left looking like a bomb site by a contractor who left them with water damage and rubble. Mum-of-two Leanne Harrison told LeedsLive she felt so distressed she formed a Facebook group to warn others and discovered 15 other people in similar situations.

The band members claim to have lost a total of £500,000 between them to Trelawny Roofing, formerly known as Trelawny Lofts, which is run by company director Colin Brown with the help of project manager Michael Turner.

They also allege that scaffolding was set up before they made payment in order to entice them into making a purchase. They claim Mr Brown was ‘aggressive’ on the phone demanding the upfront payment. Mr. Brown and Mr. Turner deny any wrongdoing.

However, clients say they are still waiting for work to continue months after their lofts were dismantled, with some reporting workers have not returned to complete the work after payment was made and scaffolding was put in place.

They also claim the company is harder to reach since Trelawny Lofts left an office in the Armley part of town.

Leanne Harrison in her loft at home in Leeds (Image: Huddersfield Examiner)

Ms Harrison and her graphic designer husband, Adam, hired the firm to convert their loft in September, agreeing to pay £34,800 for the installation of a skylight, bathroom and dressing room.

The couple say they made an initial payment of £17,400, feeling pressured as the scaffolding was already in place.

They claim the workers tore up the loft in a disorganized fashion, then arrived less frequently over the next month, with their calls and emails ignored. Ms Harrison said: “The only time I heard of Colin was when he wanted money from me. It was just on the phone and he was very aggressive.”

Leanne says she and her husband felt compelled to make the deal (Image: Huddersfield Examiner)

Ms Harrison and her husband say they waited 17 weeks for the work to be completed after work began on September 27. They told LeedsLive the workers have not been home since December 13.

The couple also claim that Mr Brown and Mr Turner tried to inflate the price by £5,000 in order to reinforce the floors.

Mr Turner told LeedsLive the floor was bouncy and dangerous, adding that although it would cost him £5,000 for labor and materials, he had halved the price.

He claimed Ms Harrison had gone ‘crazy’ so he decided to waive the extra charge.

However, after the couple rejected the extra charge, they say work stopped, leaving them distraught with a ransacked loft and thousands of pounds out of pocket.

DO NOT MISS :
Someone is going to get hurt ‘Meghan Markle faces cruel ‘endgame’ [REVEALED]
Harry sends fans into a frenzy as Duke announces ‘exciting’ news [LATEST]
Lady Louise Windsor is about to make a big decision in 2022 [REPORT]

Ms Harrison claimed: “It’s like a bomb site. It’s full of rubble, wires, plumbing and you can see the whole floor open with all the pipes. You just want to get back down. It’s awful .

“I went through every emotion. I laughed. I cried. I got angry. There were times when I didn’t want to get out of bed because of the thought of have another Groundhog Day’ to deal with that again.

“We’re not stupid people. We’ve just been tricked by those wolves in sheep’s clothing. We’ve had the wool pulled all over our eyes. It made me feel terrible.”

The couple went to their bank to see if they could request a refund of their payments, but were told once work technically started that the BACS transaction could not be returned.

Husband and wife Graeme Davies and Rachel Rich claim to have paid the company an initial fee of £22,800 for a similar loft conversion in August.

Leanne and Adam claim to have made an initial payment of £17,400. (Image: Huddersfield Examiner)

Mr Davies accused the company of storytelling during the project, saying: ‘I felt violated, ripped off and angry.’

The couple also claim they felt “a little pressured” in the deal with the scaffolding put up before their initial payment.

Ms Rich, 48, said: “I think that’s how bullying works. Because the scaffolding has gone up, it kind of makes sense to keep working with them because they’ve spent money. money for scaffolding right now, so we have to register.

Mr Davies, a professor at the University of York and Ms Rich, a history reader at Leeds Beckett University, say the work was disorganized with tiles torn from the roof, leaving their house exposed. They say a skylight was installed, but construction has stalled.

Ms Rich claims Mr Turner would laugh at her questions and condescendingly call her a worrier.

She said: “They made me feel like a neurotic woman. It’s a pretty powerful tool to use because it really pisses me off.”

The couple claim that the scaffolding was erected on September 7 and that work stopped at the end of November, although a check was carried out on the sealing of the loft on December 16.
When Mr Davies called for demanding responses and work continued, he said he had been told COVID-19 was causing the disruption.

Mr Turner told LeedsLive that Covid ‘and all the other rubbish’ had slowed the business down. He said some workers were paid twice for the same work, adding that he was struggling to find labour.

He claimed many were dishonest with him about being skilled carpenters or roofers.

Mr Brown denied using Covid as an excuse not to send workers to complete work, saying everyone in his organization had had it.

Mr Davies, 48, said one day the workers arrived, did nothing but saw off pieces of wood and left behind a bucket of urine and cigarette butts.

The couple claim that the works caused water damage to all the ceilings on the first floor of their house.

Mr Brown told LeedsLive he had done nothing wrong, but admitted the incomplete work was due to incompetence. Mr Turner said: “We spent all the money on labor and materials during the tough times. The problem was that when we started running out of money, we started grabbing other jobs. We had to choose which jobs we could complete for Naivety, yes. But criminal? No.

He added that almost all loft conversions are 45% complete.

The couple denied that scaffolding had been put up in the houses to entice clients to hire them and said “never” when asked if they had left scaffolding on the houses never to return. They blamed a fired staff member for any incomplete work.

Both men denied inflating prices after signing a contract. LeedsLive have received payment receipts from seven alleged victims, amounting to £220,436.