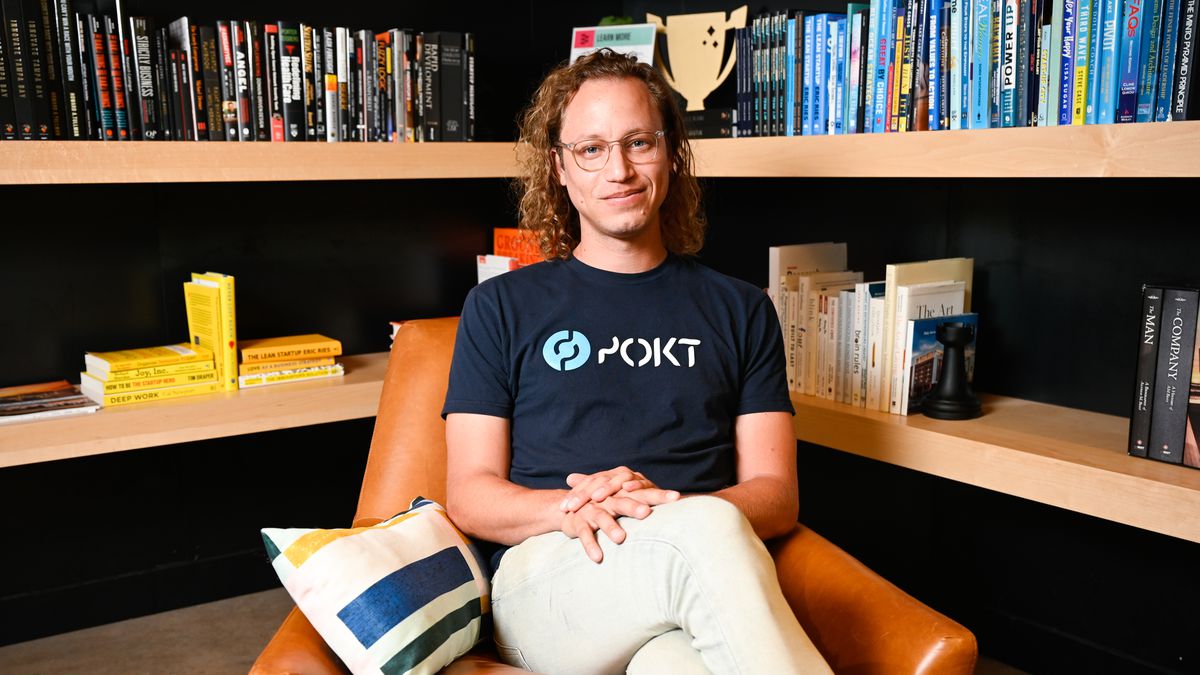 Even by top-down Web3 industry standards, Michael O’Rourke had a crazy first half.

“Greece, Spain, Amsterdam, Dominican Republic, Colombia, Argentina, France — I was probably home for a month and a half out of six months,” said the founder and CEO of Tampa-based blockchain services startup Pocket Network. For the rest of 2022, “outside of the things I really need to be at, I’m going to be at home here in Tampa.”

Even at home, things probably won’t slow down any time soon. Since launching its services two years ago, Pocket Network has become one of the hottest tech startups in Tampa, raising more than $22 million in funding and establishing partnerships with developers around the world.

A big highlight came in January, when the company received an estimated $1.5 billion valuation, making it a rare unicorn in Tampa’s developing startup scene. O’Rourke said that based on the then-value of POKT — the internal token that developers must stake to connect to a blockchain through Pocket — the company was actually worth more than $3 billion. But then the value of POKT fell alongside that of Bitcoin, Luna, and other cryptocurrencies. While startup tracker Pitchbook has always listed it as a unicorn, Pocket’s current market cap is closer to $100 million, which is no small feat in and of itself.

O’Rourke – a graduate of Wharton High School and the University of South Florida – still believes in the democratized and decentralized power of Web3, a version of the internet based on blockchain technology and the cryptocurrency market. Based at the Tampa Embarc Collective startup hub, Pocket has 57 employees in 15 countries, it is eyeing another round of funding this fall, and O’Rourke believes it can be profitable by the end of 2022.

“The important thing is that we’re actually building markets for others to come in and participate in, not just us,” he said. “I think of it as we’re building a country, minus a business.”

On a recent call, O’Rourke, 33, spoke about the rise and valuation of Pocket Network, the state of the cryptocurrency industry and more. This interview has been edited for length and clarity.

Do you have an elevator pitch for Pocket Network? How do you describe what it is to people who have no idea how blockchain works, or even what it is?

When you load a web page and it takes half a second or a second, we are what you use to load that data to your web page. In our case, these are specific Web3 applications like wallets and games and DeFi (decentralized finance). This data comes from services like Pocket.

Can you give me examples of how companies are using Pocket’s technology?

Many DeFi applications use us. I think the biggest is Aave. When you go to the Aave website and see your ethereum balance or your Aave token balance, some of that is coming from Pocket.

Subscribe to our free Business by the Bay newsletter

We’ll break down the latest business and consumer news and information you need to know every Wednesday.

You are all registered!

Want more of our free weekly newsletters in your inbox? Let’s start.

Explore all your options

Philosophically, what attracted you to decentralized technology and infrastructure?

It’s a good question. I was born in the Dominican Republic but grew up here, and have used Western Union a ton of times to send money to my family, since they all live in the Dominican Republic. I’ve worked at a few local credit unions here, selling loans. I’ve seen thousands of credit reports and seen how difficult financial systems can be for people. Then in 2013 I got into bitcoin and really started to believe in it. I became a developer and started working with different APIs (application programming interfaces), be it Google, Twitter, Facebook. And you can see how, for things that are effectively public property, but run by single rulers, they just make a change and that screws it up.

Has the pandemic acted as a speed bump in your development?

No in (Pocket) development, yes in funding prospects, at least at the time. We had to cut wages by 20%. We did this for 10 months. We ended up launching in July 2020 with about two and a half, three months of track remaining. And that’s when we managed to raise about $9.5 million. Once we launched it and proved it worked, they said, “Okay, these guys really believe they can build it.”

Related: At Synapse Summit in Tampa, All Eyes Are on Florida’s Tech Innovation and Growth

Market caps and valuations are always a bit fragile, because you never really know how much a company is really worth. If Pocket’s valuation was $2.5 billion or more in January, and now it’s around $100 million, it’s not like you lost $2.4 billion. But it’s a big change. What does it mean to you that this assessment has changed so dramatically?

It doesn’t matter to me, aside from some conversations with (cryptocurrency) exchanges and custodial providers. My view is that if we build something useful, if we build a sustainable two-sided market, the value will fall on that. I’ve been in this space long enough to see 95.98% fixes, and I don’t really care. So in the long run, the price doesn’t really make a difference. If we create value, it will follow.

Is Pocket’s valuation decline a function of the cryptocurrency crash over the past six months?

Once we got listed (on cryptocurrency exchanges), we were quite correlated with the rest of the market. It’s also the result of network costs, actually. At one point, the network cost — and when I say cost, I mean the cost of the infrastructure that people use to run the network — somewhere in the range of $40 million to $45 million a year. That’s a lot of sales pressure to cover costs. This prompted the community and us to find better efficiencies for the network. We sacrificed efficiency for distribution, yes. We wanted to prove that this network could work at scale, and now we are moving towards efficiency and sustainability.

Regulatory monitoring. All in all, I guess.

Does this concern you?

Not us. We are not in DeFi. We really did everything as above the board as possible. We operate in a gray area. If we get a love letter from the SEC, we’ll be happy to show them everything, but it’s not so much about our space. I’m more concerned about the regulation of stablecoins, DeFi, that sort of thing. My concern is with general things rather than sensible things.

Has the year marked you outside of work? You’ve been investing in bitcoin for a long time, so your personal fortune has probably plummeted with it.

Last year I sold everything and bought Pocket. So I go down with the boat.