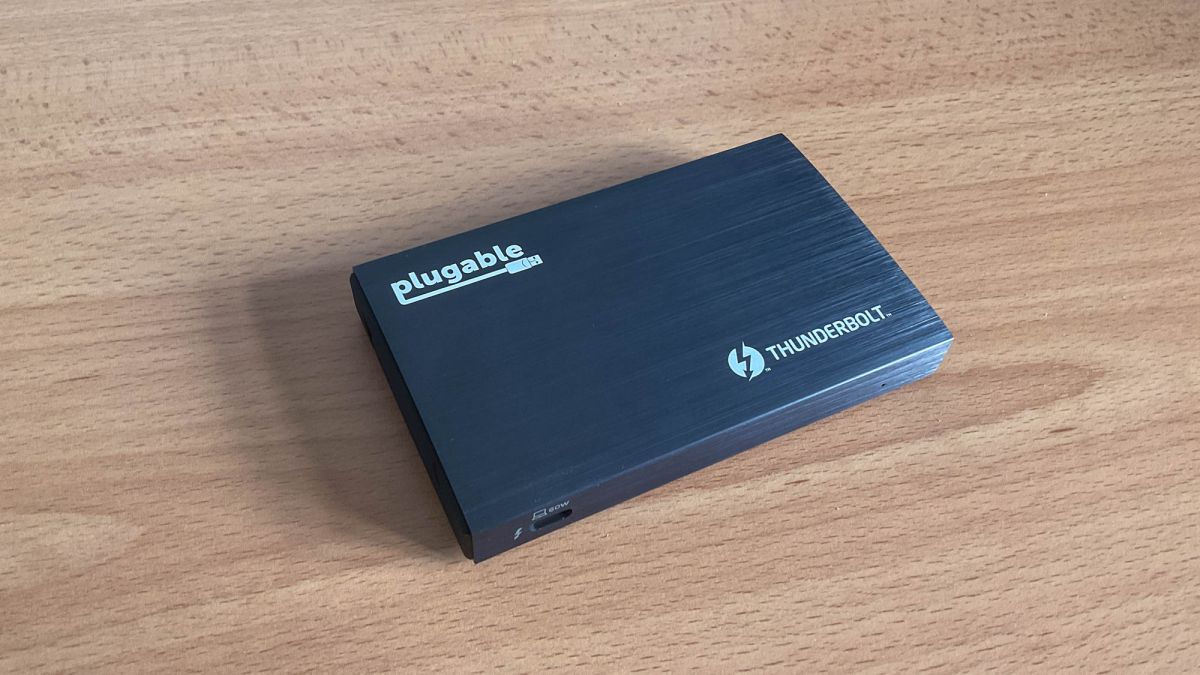 As the latest and greatest laptops continue to evolve every year, so does their connectivity. The days you need power input are decreasing; the latest series of MacBook Pros and Dell XPS laptops are a good example. Thunderbolt 4 and physical USB-C connectors are slowly taking over, and Plugable is embracing the change with its Thunderbolt 4 and USB4 hub.

Without a trace of a USB-A port, DisplayPort inputs or even the beloved 3.5mm audio jack, Plugable threw port variety out the window and focused on USB-C connections. That might not sound appealing to many who need a simple USB-A port to plug in a mouse, keyboard, or additional peripherals, but for those who can afford the 40Gb transfer rates. /s of Thunderbolt 4 and both 4K resolution monitors at a 60Hz refresh rate, you’re in for a treat.

Plugable’s TBT4-HUB3C hub provides three additional Thunderbolt 4 ports that can charge devices, transfer data, and connect to fancy external monitors at the same time. You don’t necessarily need Thunderbolt 4 either, as it’s backward compatible with Thunderbolt 3, as well as other USB-C type connections, and connects via USB-C. Is it a hub that can make its way onto our best USB Type-C hubs page, though? Keep reading to find out.

Still, it all depends on what you really need. Owners of Thunderbolt 4 compatible laptops, such as the MacBook Pro 14 and Dell XPS 13, may not want to buy PC peripherals because their keyboards, touchpads and storage are already high quality. That just leaves room for a way to plug in external displays and transfer data from one device to another. This is exactly what Thunderbolt excels at. If that’s the only form of connectivity you need and want the best right now, Plugable’s Thunderbolt 4 and USB4 hub is a good option.

Last year I reviewed the $199 Anker PowerExpand 5-in-1 Thunderbolt 4 Mini Dock, which comes equipped with three Thunderbolt 4 ports and one USB-A 3.1 Gen 2 port. At the time, few devices had Thunderbolt 4 connectivity, making it a less desirable purchase. Now, compared to Plugable’s identically priced hub, Anker’s mini dock is much more valuable with its extra Thunderbolt 4 port and USB-A input.

Plugable has taken some design cues from ultrabooks and slim Macbooks by capturing powerful power and squeezing it into a compact, pocket-sized device. At the end of the day, it’s just a few slots in a gray metal block, but it’s a sleek little device that will slip easily into any desktop setup.

The docks and hubs should be more about size than design, but I appreciate the dark gray aluminum finish which offers a professional-like appeal. Sure, the white “plugable” and “Thunderbolt” logos emblazoned on the front are far from the definition of subtle, but the hub’s smaller size means it can be tucked away on your desk without ever being looked at. Plus, its four rubberized feet mean it will stay in place without being pushed around by other connections.

The docking station can easily slip into a laptop bag if you’re on the go, but it won’t work unless it’s plugged into its 110W power adapter. That makes it more of a stationary docking station than a portable USB-C hub, but that doesn’t mean it’s not easy to carry around. Its size doesn’t take up much desk space, and since many work-from-home setups can be a tangle of wires and devices, it’s handy to have a hub that cleans up a conundrum of wires without taking up a noticeable part. space too.

Plugable’s Thunderbolt 4 and USB4 Hub has exactly what it says on the box: Thunderbolt 4 ports and nothing more. This is great for users with devices that can make full use of these ports, but it would also be nice to see an additional USB-A or SD card slot.

On the front, there’s a Thunderbolt host port for connecting to laptops. It supports 60W Power Delivery, which means users can connect to monitors and transfer files on the fly while charging their devices. It’s incredibly convenient, as it means I didn’t need to use another power outlet to charge my laptop – all you need is a connection.

On the back, there are three Thunderbolt 4 ports that support transfer speeds of up to 40Gbps and each act as a 15W charging port for other devices, including smart phones and tablets. While the Thunderbolt 4 hub allows users to connect two 4K displays to one host device, the hub can also be used to charge devices just like a simple, albeit overpriced, charging hub.

Thanks to the physical USB-C connector, the docking station blends perfectly with the best usb-c monitors. Thunderbolt 4 sends a video signal to two 4K displays or one 8K display, so if you have the cash, it might be time to upgrade the monitor. Not all monitors have a USB-C input to use Thunderbolt 4’s DisplayPort support, so I’m glad to see that Plugable includes a USB-C to HDMI 2.0 adapter.

Since the Plugable Thunderbolt 4 and USB4 hub is equipped with the power of next-gen connectivity, it’s no surprise that it can charge, transfer files and connect to multiple devices without hesitation.

With the 110W AC adapter plugged in, the Thunderbolt 4 upstream port supports up to 60W for charging, meaning it can easily power and charge a Dell Latitude and power-hungry laptop. Asus ROG Strix Scar 17 (2021). While I didn’t see much difference in charging capabilities except for the slightly faster charging speed, it’s worth noting that the Anker PowerExpand 5-in-1 Thunderbolt 4 Mini Docking Station offers 85W of power.

In order to test the file transfer speeds of the hub’s Thunderbolt 4 power, I transferred Rise of the Monster Hunter (about 23 GB) in less than 30 seconds, which is similar to the speeds offered with Anker’s Mini Dock (about 20 seconds with a 20 GB file). I was also able to easily transfer photos from my iPhone and iPad using the USB-C connections. Also, my smartphone and tablet charged through the 15W USB-C port at fast speeds.

I usually use a Origins of the HyperX 60 alloy, HyperX Cloud II Wireless Headset via a USB-A key, and Razer Naga Pro Mouse plugged in via USB-A. With no USB-A port in sight, I still plugged the rest of my peripherals into my laptop. That sort of defeats the purpose of a docking station for some, but there are also ports on a laptop for a reason. However, for an expensive docking station, Plugable could have accommodated a few more ports.

While there aren’t many with two 4K monitors, or even one 8K monitor, Plugable’s hub can handle them. Even better, the included USB-C to HDMI 2.0 adapter comes in handy when connecting to displays without a USB-C connection. I could connect to my colleague’s Asus monitor setup and even a Sharp 4K TV.

It should be noted that M1 Macs will only support one external display and users of pluggable states will see “limited functionality with USB-C 3.2 systems” and it is “not recommended to use it”. ‘use with Windows Thunderbolt 3’ systems. Although my setup couldn’t take full advantage of Thunderbolt 4, I didn’t see any issues with USB-C 3.2 on my Asus laptop.

At the end of the line

If you’re looking for a laptop with smooth connection speeds, but want a few extra ports and an easy way to charge multiple devices at the same time, the Plugable Thunderbolt 4 and USB4 hub has you covered. Not only is it a small accessory that will fit easily on anyone’s desk, but it’s a pocket-sized powerhouse that makes the most of anything with a USB-C port.

The problem? No other ports. USB-C hubs and docking stations may change with the rapid evolution of connectivity, but that doesn’t mean the accessories that plug into them make the same changes. USB-A is still a widely used form of connectivity. Just because Thunderbolt 4 is the latest and greatest doesn’t mean it can easily connect with keyboards, SD cards, headphones, etc.

However, for those who just need extra Thunderbolt 4 and USB4 power, Plugable’s hub will do. If you’re looking for an extra USB-A port and Thunderbolt port, Anker’s PowerExpand 5-in-1 Thunderbolt 4 Mini Dock is a great option. For seven additional ports and a much more versatile docking station, check out Anker Thunderbolt 4 12-in-1 Docking Station.