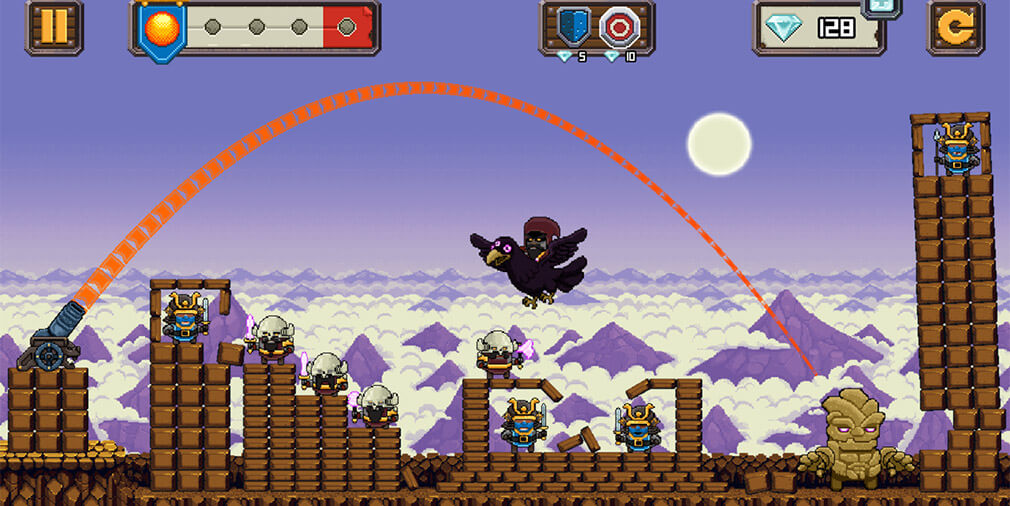 Townsmen is an empire building game where you have to take a small settlement and turn it into a thriving kingdom! You can build buildings like taverns, markets and farms which will then produce different resources for your town. You can harvest, forage, and collect taxes from villagers. You control this kingdom and will have to make decisions when events such as great fires and disease plague your city. You will therefore have to make sure that your kingdom empties and that your enemies are not able to harm your land by spending money on defenses. and make sure you are protected.

Reigns is a text-based game that works much like Tinder. You will rule your kingdom and become a powerful monarch who must make decisions for your people. You will have to work with the church, the people, the army and the treasury. You’ll interact by being given a card, with a bit of history on it, then swiping left or right to make your decision. These decisions will change your stats, affect your empire, and hopefully keep you in power – as long as they’re good decisions.

Eternium has beautiful graphics, to draw you into this action-adventure RPG. You can choose to become a mage, warrior, or bounty hunter, taking on the world around you as you battle massive dragons, demons, and sometimes other people. There are plenty of weapons to choose from, other characters to discover, and different worlds to discover. Eternium also has a bunch of different abilities that you can unlock with your character, which can further improve your game. You can play alone or online with friends.

In the field of text-based games, D&D Style RPG is a choice for you. In this game, you will make choices for your character, which will increase or decrease your stats and hopefully will not lead to death. The consequences of your decisions are almost unpredictable, but the game itself is captivating and different, so the adventure will keep you interested! The story itself is very long and there are a lot of different choices to make, so you have plenty of options to choose from as long as you don’t suffer instant death.

Kingdom Two Crowns is a side-scrolling micro-strategy game, with stunning pixel art graphics, where you become a monarch, who rides around on your horse. You will recruit loyal subjects, build your kingdom, and then defend it against anyone who dares attack you. As well as a medieval setting, there are also the Dead Lands and the Shogun to explore. Kingdom Two Crowns has a lot of action, building and exploration in the game, which can be a lot of fun to play! If you want, you can even team up with a friend and become co-monarchs.

March of Empires prepares you for massive medieval warfare where you must conquer all your enemies. You will have to build your castle, create an army and dominate the rest of the world as your civilization grows. There’s only room for one king in March of Empires, and you’re determined that it’s you. There’s plenty of territory to take over, a power balance to know, and perks specific to your army and playstyle. It’s an intense MMO that’s well worth a download.

If you’re looking for a medieval game that’s less about fighting and becoming a monarch and more about hanging out and surviving this period, My Little Farmies is a casual mobile farming game, set in the medieval period. Daily life on the farm requires you to tend animals, grow crops, and serve the villagers of your town. You can make decisions about the buildings you create, what you plant and the animals you keep – because it’s your farm after all! This game is similar to Farmville, but in a different time period.

Graveyard Keeper is a management game in which you manage a cemetery. get rid of the dead, cut costs, gather resources, and do whatever else you need to do to get a good deal. It’s labeled as the most inaccurate medieval graveyard management sim ever and fits that bill directly. It’s a really fun game, with lots of ethical dilemmas, decisions that will affect the whole village and lots of dead bodies. This is a very interesting game in this category.

Darkness Rises is another action-packed RPG with great graphics and intense battles to face. You start in a land full of darkness, with demons coming to kill whoever they see. You seek to defeat them, descend into Hell itself, and rid yourself of all evil before your entire world is taken over. There’s a lot of action, hacking and cutting through monsters, and exploring a very dark dungeon in houses to find something useful and not just enemies. Darkness Rises also has PVP arenas, if you want to fight against other people instead.

Feel free to use one of the Darkness Rises discount codes we offer in case you decide to give it a try.

Guild of Heroes is an old-school action RPG where you enter a magical world of wizards and knights, able to fight monsters and plunder lairs of dragons. This game contains many mythical creatures, like elves, orcs and trolls that you can undertake, as well as quests to follow, raids to undertake and a huge journey that you can be a part of. If you like PVP battles, you also have the option of taking them on through Guild Wars. Guild of Heroes also offers crafted weapons, if you’re into that.

Maybe you don’t want to be a knight or a wizard, but rather control a dragon. That’s great, you can do that in Hungry Dragon, a medieval fantasy game that’s packed with dragon-related action. Earn points by spitting fire and destroying buildings, eating monsters that could fill your stomach. Find pets to travel with you, fly around the world as you please, and enjoy all that comes with being a dragon.

Basing its story around the time when King Arthur was betrayed by his nephew Mordred, King of Avalon is all about the mighty sword; Excalibur. This sword is needed for a new king to be crowned ruler of the kingdom and unify the whole empire. You can raise a dragon and build an army to fight in Excalibur’s quest and become the king of the whole empire. There are plenty of epic battles, friends to make along the way, trades to make, and more in this game!

We also have King of Avalon gift codes that will help you get a good head start in case you decide to give it a try.

A more casual medieval mobile game, you can throw cannonballs and blast little orcs in this Angry Bird style game. There are over 100 levels in this game, with a massive map for you to explore. Attacks need to be planned and troops need to be used wisely, so you can get deeper into the game. It’s a laid-back title that’s fun to play and easy to understand in its gameplay mechanics.

The Civilization of Sid Meier VI

Available on: iOS + android + To change

Civilization VI is a turn-based strategy game developed by Firaxis Games. As in the case of the previous games, the goal of the player is to create and develop his own civilization. Starting with a small tribe, you will soon have to grow it to the level of a huge empire and dominate the world.

It goes without saying that there will be a lot of such empires in Civilization VI, so interaction with their representatives can take place both diplomatically and turn into a real war.

The vast majority of buildings and structures will now be constructed almost instantly. For this reason, you need to pay more attention to tactical planning.

Tormentum: Dark Sorrow is a medieval style fantasy adventure puzzle game with horror elements. The game’s protagonist has lost his memory and has been imprisoned against his will in a terrifying prison, from where he begins his journey. Wandering in the valley of darkness becomes a metaphor for the character’s inner turmoil. He is forced to face his own fears and interpret them to remember his true essence.