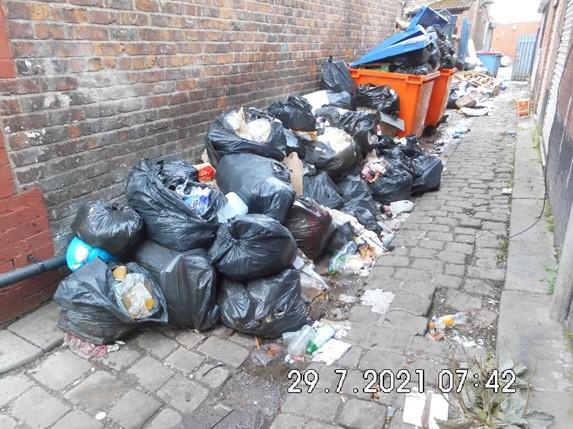 Two businesses £20,000 out of pocket after being found guilty of landfill and waste offenses

Two food establishments in south Manchester have been ordered to pay a total of £20,470 after being sued for waste offenses this week.

Karahi Box Ltd – trading as Daawat Authentic Karahi By Jilanis – at 659 Stockport Road in Longsight has been fined £9,000 for aerial discharge offenses under the Environmental Protection Act 1990 environment and for failing to comply with a commercial waste notice issued under the Environmental Protection Act 1990 at a hearing at Manchester Magistrates’ Court on Thursday March 24.

The company was also ordered to pay costs of £550 and a victim fine surcharge of £190.

In July 2021, Council officers found fly-spiked litter in the alley at the rear of the business premises. The waste was confirmed as coming from the company by an employee.

A legal notice had already been served on the company to advise them on responsible waste management and disposal. A fixed penalty notice was issued to the company but remained unpaid.

On another occasion, in August 2021, officers on routine visits to the area discovered other waste overflowing from containers in the same alley.

Finally, in September 2021, around 50 bags of rubbish and other loose items were found dumped near the lane between East Road and Sullivan Street, Longsight. The waste was investigated and evidence including receipts and leaflets was found linked to the takeaway.

The company was invited to a legal meeting to address the waste issues on the premises. The company did not respond and the case was taken to court.

The company did not attend the court hearing, which took place in their absence.

Karahi Box Ltd – trading as Daawat Authentic Karahi By Jilanis – was asked to pay a total of £9,740, with payment due within 28 days.

The company was also ordered to pay costs of £540 and a victim fine surcharge of £190.

On 5 occasions between April 2021 and November 2021, Council officers found litter deposited in the lane between Eva Street and Grandale Street, which was linked to takeaways by receipts and packaging bearing the company’s name.

The company had already received a legal notice advising it on responsible waste management and disposal. The company has also been sued for similar offenses before.

The manager of Karak (c) Ltd claimed in an interview that the waste was ‘collection day spillage’. The case then went to court, but the company did not attend the hearing.

“Lawsuits are always a last resort. Our aim is to work with businesses to improve their waste management and ensure that our streets are not marred by litter. These spaces are shared by the inhabitants and the companies have the responsibility to manage their waste in such a way as not to impact the local populations.

“These companies have clearly breached their responsibility, and the level of fine imposed on both indicates the seriousness of the breaches. I hope this will also serve as a warning to other businesses that Council officers are out there – and when we uncover illegal activity, we will use the full extent of the law to reprimand businesses that knowingly dump their waste.