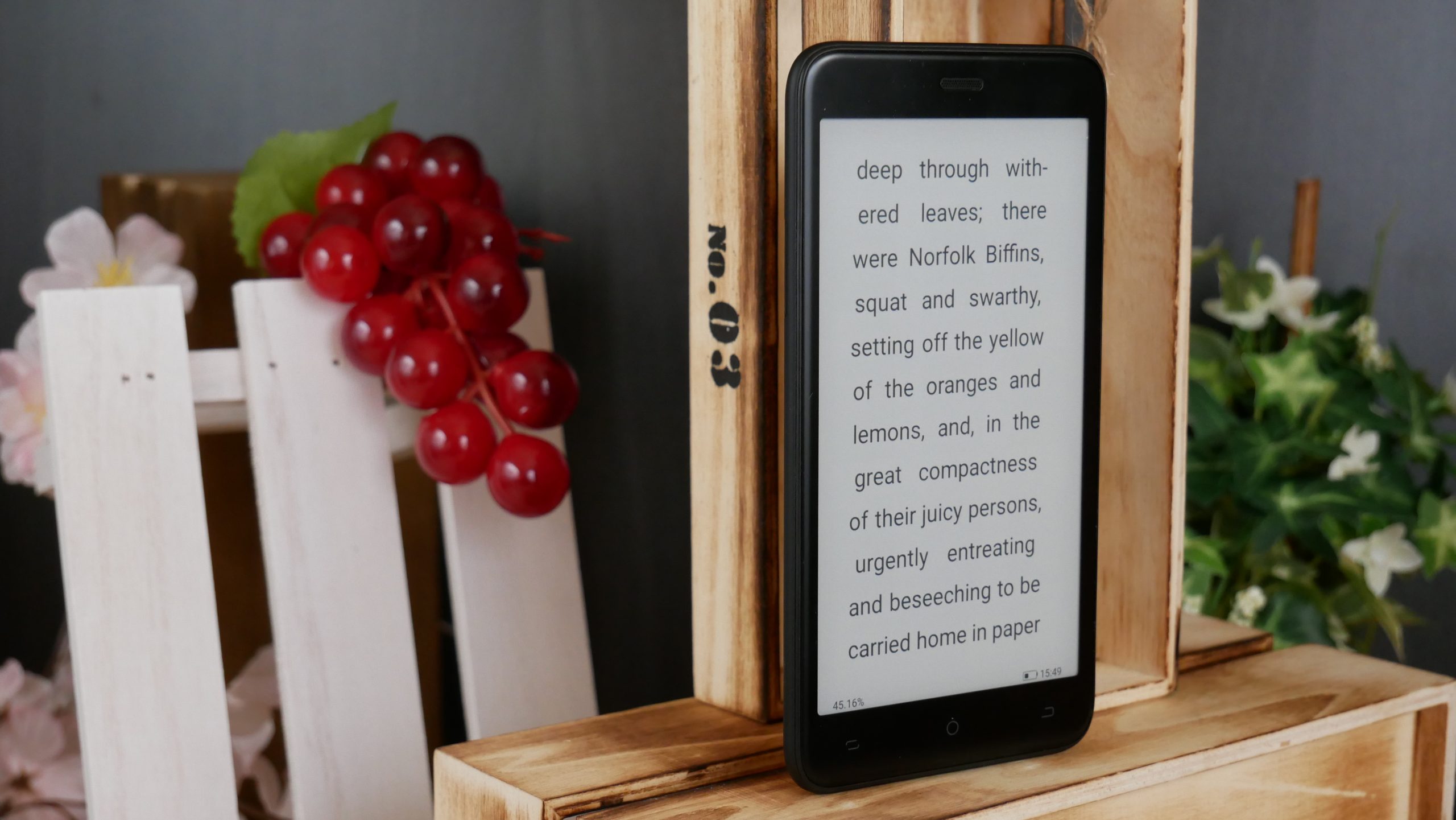 Tencent has just released its first E INK smartphone in China. This phone is designed for buying and reading e-books from Wechat Reading and Kindle. You can upload your own e-books such as EPUB, Mobi and TXT, but it will not read PDF files. It runs the Android Go edition of Android 9, but you can’t upload your own apps, nor can you upload PDFs, as there’s no file browser. Almost every aspect of the phone is locked unless you have a mainland China phone number or can access Wechat QR codes. It sells for around US$139.99 and is available on JD.

The Tencent pocket reader features a 5.2 inch E INK Carta HD e-paper screen with 284 PPI. The screen is flush with the bezel and is protected by a layer of glass. It has a front-lit screen, with around 12 LED lights that are positioned along the side of the bezel and cast light evenly across the screen. There is no color temperature system. There are several different speed modes to boost the performance of some of the preloaded apps, such as normal and A2.

Under the hood is a Cortex A53 processor, 2GB of RAM and 16GB of internal storage. It has WIFI, 4G, Bluetooth 3.1 and is powered by a 2000 mAh battery. The dimensions are 144x74x7.9mm and weighs 130g. The phone is black and has volume buttons on the side, as well as a power button. There’s a 3.5mm headphone jack, so you can listen to audiobooks or music. There is an SD card slot, capable of 32GB of additional storage.

Android GO is a nice, lightweight operating system for phones that don’t have a lot of processing power or memory. There are a handful of pre-installed e-reader apps, such as QQ Reader, Wechat Reader, and Kindle. These apps are the Chinese versions and you can buy books and read them directly in the app. There is a small app store, but you need a Chinese phone number just to use it. You also have a contact list, SMS, an Edge Internet browser, a library, a note-taking app, and a few widgets. If you swipe down from the top of the screen, you can adjust brightness settings for the front-lit display, configure Wi-Fi, or enable one of the speed modes.

Tencent is a massively huge company with a presence both in China and overseas. They are currently the third and fifth largest instant messaging service in the world along with WeChat and TenCent QQ respectively and are the world’s largest company in the video game industry. Outside of mainland China, the device is pretty locked down, leading you to a lot of roadblocks unless you have a mainland China phone number or are willing to scan countless QR codes to get there. where you need to be. But alone is quite a capable Mini EPUB reader. Simply connect USB C to your PC and charge all your e-books at your convenience.

The screen itself is quite capable, you can turn pages with the volume buttons for one-handed use, and it even has built-in sound so you can enjoy TTS, which the xiaomi ink palm can’t even do. You also have the option of using Internet Explorer, yes, Internet Explorer, as your Internet browser to read e-books online, or even access stores like Amazon and the Sony Reader store. But, that’s the definition of, you get what you pay for. It’s under $150, and it’s definitely geared towards a market that it was never intended to be used outside of China.

Michael Kozlowski has been writing about audiobooks and e-readers for twelve years. His articles have been picked up by major and local news sources and websites such as CBC, CNET, Engadget, Huffington Post and The New York Times. He lives in Vancouver, British Columbia, Canada.

‘Keep your mask in your pocket:’ End of term sparks mixed reactions in York Region